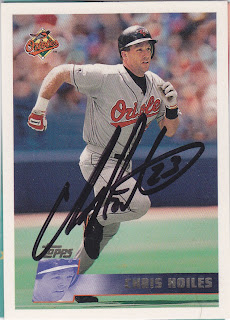 This is the final card that I got signed at the Orioles alumni signing at Camden Yards in September. Joe Orsulak and Ken Dixon were the other two alums that signed that day. Just like those two, this card was provided to me by Ryan of the Great Orioles Autograph Project. He had a few Hoiles cards to choose from and I picked this one because I didn't think I had a card from this set signed. I guess that I forgot about the Eisenreich card I posted yesterday.

Chris had a pretty good ten-year career, all with the O's. He was a career .262 hitter that slugged 151 home runs including a career high of 29 in 1993. According to Wikipedia, Chris is the only player to ever hit a grand slam in the bottom of the ninth with two outs, a 3-2 count, and down by three. That is pretty cool. He even had a two grand slam game a couple of years later. He finished with eight grand slams for his career.

Chris managed the York Revolution for two and a half years. He stepped down during this past season. Paul, from Paul's Random Stuff, was going to try to get a card signed for me, but Chris left the team before that could come about. So, I was pretty happy that Chris was present at the alumni signing.

This is an interesting looking Topps set. It could have been a little better if a different picture was used by the name. Just cropping a picture of the face on the main picture doesn't quite do it for me. I'm glad that they didn't do that on their '83 or '84 set.
at 7:05 PM