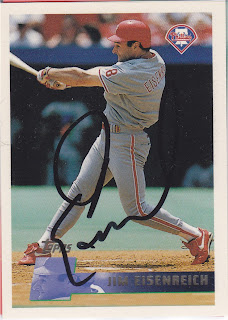 This is the third and final Jim Eisenreich card that I got signed at last years Royals Fanfest. You can see the first one here and the second one here. The first two were Royals cards. So, I had to mix it up a bit with a Phillies card.

Prior to that Fanfest, I had two Eisenreich autographs and neither one was on a card. Here is the first one that I got. 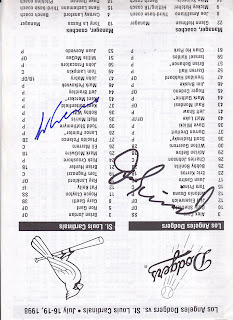 This is a roster from a Dodger-Cardinal game that I attended in 1998. I realize that it is upside down, but that is the way that it is signed. Jim's signature is on the right. I'm not positively sure who signed the other side, but my guess is Wilton Guerrero. You can see that Jim's signature changed slightly since 1998.

Here is the other autograph that I had from him. 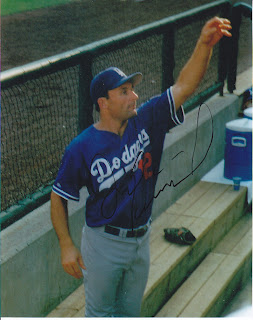 This is a picture that I took of Jim signing autographs at the Dodger-Cardinal game. I got this 8x10 signed at the Turkey Bowl in 2003. Jim told the other players around him that this was one of the rare photos of him as a Dodger since he didn't play too much with them. The signature is kind of hard to make out over the jersey, but that is the way it goes sometimes. It is still a neat piece of memorabilia.
at 3:57 PM