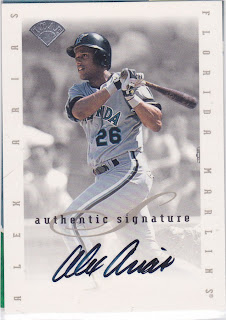 I got this card in a pack in 1996. The only reason I even bought the two packs was for the autographs. Leaf borrowed a concept from Signature Rookies and made a set that included one autograph per pack. The only problem was the these packs were pretty pricey. I can't remember how much they cost, but I do know that two packs was all that I could afford.

Alex played parts of 11 seasons with the Cubs, Marlins, Phillies, Padres, and Yankees. He played all four infield positions, but he got the most playing time at shortstop. His best season was probably 1999 with the Phillies. That year he had career highs in every offensive statistic (except for triples) including 20 doubles and a .303 average.

There is no number on the back of this card. Beckett lists the card number as 4.
at 2:10 PM

I got the same Arias card out of the dollar box at this month's local baseball card show.

Now that the packs are all opened and the singles have settled in at fair market values, I like the Leaf autograph cards. You can easily find a signed card for just about anyone who was in the majors in 1995 or 1996.

But I can just see what my own reaction would have been to pulling an Alex Arias autograph out of a $10 or $15 pack of cards.

Alex is one of the Orioles roving minor league instructions, or at least he was last season. If anyone is looking for another Arias auto, I can help you out. Nice card, Zach.

I bought three or four of these back then and didn't get anybody of note. I have picked up a few in dollar boxes over the years.

i love these cards i remember buying like 20 packs then a box for 400$ and i ended up getting the best pull in my history of collecting a greg maddux signed century marks worth 600$ at the time 400$ now. I remember though you did get a ton of crappy cards