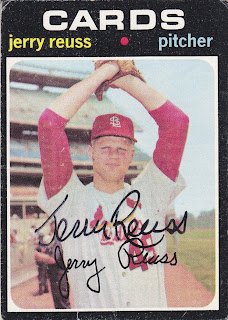 Four months ago, I didn't have a single 1971 Topps card signed. Then, on the way to visit the grandparents, I got my first signed '71 Topps, a Maury Wills. Last month, in a matter of ten days, my signed '71 collection went from one to five. So, the rest of the work week will be focusing on those new additions, starting with this Jerry Reuss.

I got this card signed through the mail on the 16th of last month. It took me about a month and a half to get the two cards back (I bet you can guess what other card I sent along).

I like this card for a variety of reasons. The main reason is that Jerry actually looks young on this card. Jerry pitched for 22 seasons and in most of the cards I have of him, he looks older than the average ball-player. The second reason I like this card is because it lists the team as the Cards. This may have been a common practice back in the day, but the only team that will get their name shortened any more is the Athletics. The final thing that I like about this card is that Jerry signed it across his body. In the few autographs that I have seen of his, it looked like he avoided signing across his body at all costs. That is not the case here. I guess that since there was already one signature across his body, one more wasn't going to hurt at all.

I got this card when I was in grade school. I had a buddy that didn't collect cards, but somehow he had a box with some older cards in it. Every now and then he would let me pick a few out. That is where this card came from.

Also, if anyone cares, I finally updated my want list a bit. I added a few '81 Donruss cards that I would like. If anyone can help me out, just let me know and we will get something worked out.
at 1:05 PM

Wow, it seems funny to see a young Jerry Reuss. For some reason, I imagined that he always looked old. :-)

I'm glad that I am not the only one to think that.

Nice one Z. I love sigs on those older cards.

Thanks Brian. It's nice to add a signature on a beat-up old card like that.

Nice! Jerry had one card issued as an Astro that one day I will eventually send off to have signed.