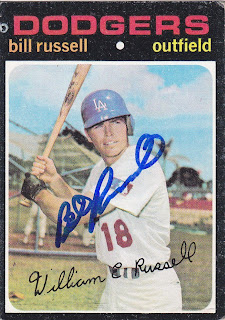 Here is another through the mail return that I got last month. This one came the same day as the Jerry Reuss cards and the day before the Dave Duncan card. It was a good two day stretch that netted me six signed cards, three of which were from this set and two from the '81 Donruss set.

Bill has the distinction of spending his entire career with the Dodgers. His is in the team's top ten in many catagories and is their all-time leader in intentional walks. He was a three-time All Star and he played in four World Series. He even managed the team for parts of three seasons where he had a .537 winning percentage.

This is the oldest signed card that I have of a player wearing a batting glove.

I got this card many years ago from the same friend that I got the Reuss card from. Both cards had just been sitting in a box, so it was nice to get some use out of them and breath some new life into them. It took just over two months to get this card back.
at 1:56 PM

Bill Russell is a member of the Phungo first game club - Played in the first game I ever saw - Dodgers v Phils in 1977.

Interesting observation about the batting glove. When did players start using them?

Wow, I don't think I would have noticed the batting glove. I thought they were a more recent innovation.

I have no idea when batting gloves started being used. Hopefully Night Owl will come up with something.