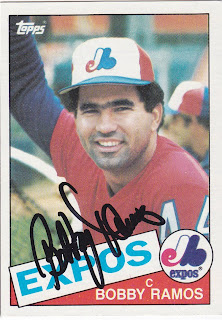 This is the second and final Bobby Ramos card. I got this card signed the same day as the John Shelby card I posted yesterday. Bobby signed this as the Rays bullpen coach. I'm not positive, but I think that he will be back with the Rays next year. Here is the first card I posted of him.

I only took the two cards of him since those were the only two I had of him. Well, actually, I had his Topps rookie card. But, that card also has Tim Raines on it, so I decided against getting it signed by Bobby.

With that uni-brow, Bobby looks like the Cuban version of Wally Moon. Also, I like the numbers on the sleeves. Are the Phillies the only team sporting sleeve numbers anymore?
at 10:20 PM