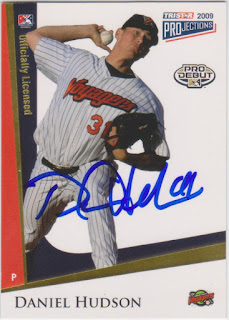 Here is a card that I got signed at a Spring Training game in 2014. Daniel was with the Diamondbacks at the time and he stopped along the third base line to sign some 'graphs before getting to the dugout. He signed two out of three for me that day, including his 2012 Topps Heritage card.

Out of all the cards that I could have picked to blog about today, I picked this one for two reasons. The first is that it was in the album that I happened to grab to look for cards to scan. Once a came across this card, I knew I had to pick it because this is the lowest numbered card that I have got signed.

If you are unfamiliar with this 2009 Tristar product, this particular card happens to be a gold parallel. The difference is pretty subtle with just the two slivers of gold foil in the border. These parallels are numbered out of 25. To date, I have yet to get a lower numbered card signed. I have a Mike Moustakas card numbered to 10 and a Josh Hamilton printing plate that I thought I had decent chances of getting signed, but I was never able to get them done.

Josh finished out last season strong. After getting picked up by the Nationals in a deadline trade from the Blue Jays, he would go 3-0 with 6 saves and a 1.44 ERA to finish off the regular season. He then threw 9.2 innings of relief in the postseason, going 1-0 with 4 saves and 3.91 ERA en route to a World Series Championship.
at 4:30 PM

I like TriStar, usually lots of blank background for autographs.