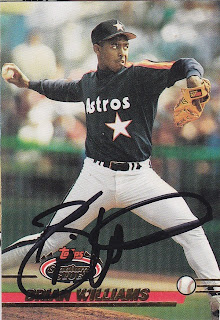 
I got this card signed at the Astros Fanfest earlier this month. Brian was one of the Astros from the '90s that appeared. He only pitched for the Astros for four seasons, so I was kind of surprised that they had him attend (the same can be said for James Mouton).

For some reason, part of the right side of this card got clipped of while scanning. But, overall, I really like the design of this set. It is probably my favorite Stadium Club design. But, just like the SP, I do not have too many of these. I finally got one signed, though. When I was getting my autograph book ready, I noticed that there was a crease at the top of the card that went through Brian's head. Normally, I wouldn't take it to get signed. But, I wanted one of these cards signed bad enough that I took it anyways.
at 10:40 PM