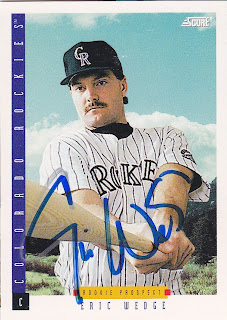 Here is another card that Eric signed for me in Houston earlier this month. This was the first card that he signed and it took me a second to realize that I had accidentally given him a silver Sharpie (which I officially retired after the road trip). I got that corrected and he started over in blue. You can see the silver around his "E".

Eric was the 48th pick by the Rockies in the expansion draft and only appeared in nine games for them. This is the first Rockies card on here.
at 8:24 PM

I love how they used the Rocky Mountains as a backdrop on these cards. I want to say I have a different Rockies player with the same or similar backdrop

Didn't occur until just now, but these cards look incredibly like 1993 Fleer.

Those early Rockies and Marlins cards were great.

This isn't the best picture of the Rocky Mountians. To me, it looks like western Kansas with a very big green bush on his left side.

And Dave, I never thought about the similarity until you just mentioned it. But, as soon as I read that, I could see exactly what you mean.

I know what you mean Paul. In my 1993 album, I still have every single Marlin and Rocky card that I owned in it. Those were the first expansion teams of my lifetime.