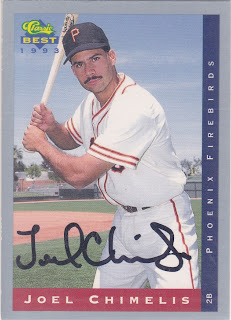 Here is the latest card on here of a player that never made it to the Majors.

I got this card signed at a Brooklyn Cyclones game last summer. Joel was the hitting coach for the visiting Tri-City Valley Cats. He was nice enough to sign the one card I could find of him, but he didn't say much. He did still have the same style mustache.

Joel played nine years in the minor leagues before calling it quits. He spent most of the time in the Giants organization. He played part of four seasons in AAA, but never got the call.

When I was getting ready for my New York trip, I was rounding up cards of some of the coaches I was going to see. Somehow, I came across this card. I was pretty lucky to find it since I don't have too many from this set. I probably have only three or fours packs worth. The funny thing about this set is how closely they resemble '93 Fleer. But, I'll get into that more next week.

As for the Phoenix Firebirds, they were forced out of town by the Arizona Diamondbacks. So, they moved to Tuscon and became the Sidewinders. I've seen Firebird jerseys and hats before, but I have never seen the ones depicted on this card. I don't know if they changed their logo of if the team had a turn back the clock game. I'll go with changing the logo. I wish I had a better picture of the jersey front. They look retro.
at 9:38 PM