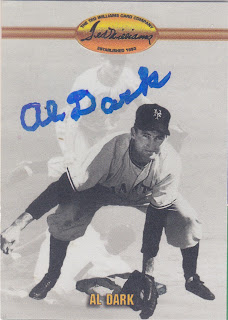 I got this card signed through the mail this past December. When I got it, two things stood out to me. The first thing is that Al tried to sign the card with a ballpoint pen. You can see that on the scan pretty easily by his A. The second thing I noticed is his signature. Al is creeping up on 90 years old and it looks like he was having a little bit of difficulty signing this card. It is very cool that he still signs through the mail at his age.

Al was a three time All-Star in the early '50s with the New York Giants. After his playing days, he went on to manage four different clubs (with two stints with the A's) and won one World Series title with the A's in 1974.

As for this Ted Williams set, I don't have too many of these cards. The only place that I ever found them was at a card show in '93. Most of the cards were of older players and they even included some Negro League cards, retired players in their minor league uniforms, and cards of the All-American Girls Professional Baseball League. I think that they might have even included some cards of Juan Gonzalez and Frank Thomas.

I like the design of the card. It reminds me of 1992 Studio, but without a border and with a better picture than the posed senior portrait.
at 9:44 PM