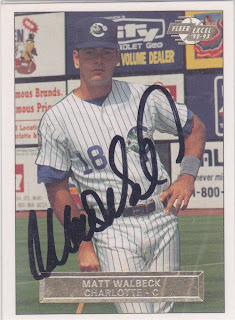 Here is the second of three cards that Matt signed for me last summer as the thrid base coach for the Rangers.

As for these cards, I believe that this set is Fleer's only minor league set that they ever made. The weirdest part about the set is that they are listed as '92-93 on the top of the card, just like a hockey or basketball card would be. That has never made any sense to me. On the back, they have a '92 copyright date which makes them sound like a '92. But, they have the '92 stats back there too, which makes them sound like a '93. They are basically a '93 card that got printed in '92. I do not know why they felt like they had add both years to the card front.

As for the team, the Charlotte Knights, they are still playing today in Ft. Mills, South Carolina. Yes, they are still the Charlotte Knights. They just play their games outside of Charlotte. The only difference is that they are now part of the International League and are affiliated with the White Sox. In 1992, they were in the Southern League and were the AA affiliate of the Cubs. That was their last season in that league.
at 5:25 PM

Cool card, almost looks like an '07 Bowman Heritage by accident.

I remember very few details about my first season of fantasy baseball (1994). But I do remember that my dad drafted Matt Walbeck as one of his two catchers.

What, exactly, reminds you of the Bowman Heritage.

I'm hoping that it is the posed shot. If you like this one, you will like the next three. They are all posed shots as well.

Another thing that might make it look old is the sheet that it is in. When I scan my cards, I do them a sheet at a time just to save me time. These cards are in an old-school sheet that is about twenty years old.

Could be the sheet. Plus the pose for sure. Mainly, though, it's the stripe on the uniform (shoulder, sides). It is angled so that it almost looks like a black outline, around his body, just like Bowman Heritage.

Plus, add in the "small town" background and facsimile (in your case real) autograph...overall giving me some strong vibes.

And yeah, I love posed shots. Although a couple of your '93 MLB Fleer were GREAT action shots. I love it when they really hone in the focus of the lens on the action.