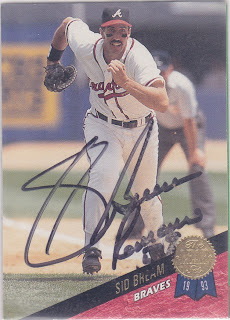 This is the second card that I got signed through the mail by Sid. The first one can be seen here. Just like the first one, some of the signature came off somehow. On this one though, the signature faired better than the inscription. I'm still baffled about how this happened. I would think that the signature would come off easier on this card than the older Topps card.

I love the photo on this card. It looks like Sid is charging to field a bunt. Good choice of a picture, Leaf.

Last week a fellow blogger sent me another Sid Bream signed card since mine did not turn out too well. I'll be posting that one in a couple of weeks.

Tomorrow, I'll be heading to Kansas City for my first real game of the year. I'm pretty excited to see the "new" Kauffman Stadium and to see the first place Royals (I know it's early, but it's the Royals) go for the sweep against the Tribe. I'll be bringing my broom.
at 10:12 PM

Thanks Pual. I am looking forward to it.

Jealous. I get to see a major league game once every 3 or 4 years.

Enjoy the game, the Royals have always been my #2 AL team after the O's since my dad's family is from Kansas. I hope that the renovated Kaufman Stadium is nice.