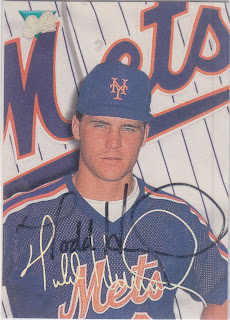 I got this card signed through the mail in the early or mid '90s. I probably got it before 1996, the year Todd set the catchers home run mark when he hit 41. For some reason, I thought that Mike Piazza broke that record. Come to find out, the most Mike ever hit was 40. It was Javy Lopez that broke the recod when he hit 43 in 2003. What was I thinking?

It is kind of funny that Mike Piazza replaced Todd in New York and Todd ended up replacing Mike in Los Angeles. It is also funny to see that Charles Johnson was in the package to LA in the Piazza trade. After that season, Johnson was traded to the Mets for Todd. The Mets then flipped him to the Orioles for Armando Benitez. I'm sure that Johnson wasn't feeling too popular that year.
at 8:43 PM

Todd Hundley was one of my favorites in the 90s, though I wasn't really following baseball all that closely the year he set the catchers' home run record.

I was a huge Todd Hundley fan. I thought he was a great, gritty player.