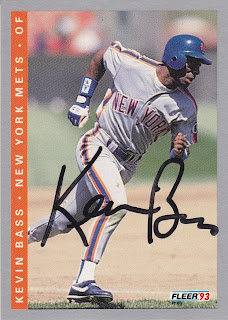 I got this card signed at Astros Fanfest on Saturday. Kevin was one of the many Astros alumni that were signing during the game. He was at the same table as Enos Cabell, Brian Williams, and Alex Trevino. When I first got into the line, it was moving pretty slow. When I got about half way through it, a guy from the Astros staff started going down the line telling everyone that it was only one autograph per person. After that, the movement picked up a bit. When I got up to the table, Enos Cabell signed all three cards I had and the other three guys signed both of the cards I had of each of them. So, it ended up working out just fine.

You can tell that this sixteen year-old card signed a little better than the Baerga that I posted yesterday. This just helps out my theory of cards losing their gloss over time. Tomorrow's card, another '93 Fleer, looks even worse than the Baerga card (but not as bad as the Salmon).
at 4:50 PM

I hope Kevin Bass is doing well, he was always a good signer when he played for this O's.