Every once in a while, I will get some cards from fellow bloggers. I have always tried to give them a shout-out during one of my posts, but I never felt like that was enough. So, from now on, I will be including some scans of the new cards. I should have started this a couple of months ago when I first got my scanner. Oh well. I have started it now. But, I will not include any autographed cards sent to me. Those will fall in line with all of the rest of the autographed cards.

So, without further delay, here are some highlights of a package that Rod, from Padrographs, sent me a couple of days ago. First up is a postcard from Virginia. I am assuming that he took this along with him to the post office with my address on it to make it easier for himself. I wonder how many of these he has. Check out the little Teddy Roosevelt strumming the banjo. 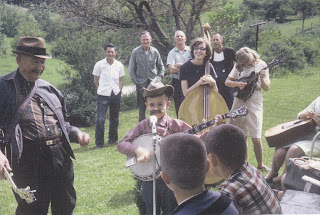 The first card out of the shoot was this oddball Kevin Appier. I have never seen these before. It was made by Fleer and is the same width as a normal card. But, it is over an inch longer. It was issued in '94. Any ideas where these came from? 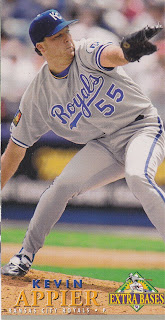 After that was a nice stack of Royals cards. The very top card was this one. This is my very first card of a Royal from '69, their first year. My first impression when I pulled it out was that it was a reprint. Besides it being mis-cut (but not as badly mis-cut on the bottom as it looks), it was in pristine condition. After checking it out, I found that it was actually from the '69 set. I can't believe how well this 40 year-old card has been preserved. Plus, it is of the Royals first manager and 2009 Hall of Fame inductee, Joe Gordon. This was a great start to the stack. 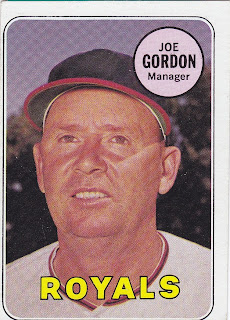 Next up were some current Royals that I needed. I had two Tony Pena, Jr. cards prior to this package arriving and got another one that day that I ordered. So, my TPJ collection ballooned from two to five cards in one day. I also got an Alex Gordon Mockumentary (not pictured) that I did not have.

Next up are some awesome Bo Jackson rookie cards. Here are his '86 and '87 Donruss, The Rookies, cards. 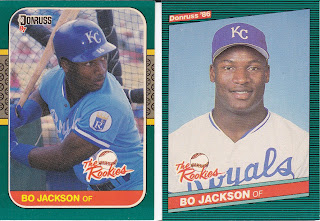 To be perfectly honest with you, I pretty much grew up a Dodger fan. In 1986, at the age of seven, I made the Dodgers my favorite team (mostly because my dad was from the LA area and that was his team). But, for some reason, by the time I was in fifth grade (1990), I was switching my affiliation over to the Royals. The only reason for that was because of Bo. He was all over TV and all over magazine ads. I starting buying up every single card of him that I could afford. The two pictured above were two that I never had (I don't even remember the '87). Anyway, the Royals got off to a crappy start that year and I quickly fell back to my team, the Dodgers.

I was a Dodger fan until they traded away Piazza. After that, I gave up on them and went a season without a team, though I was still a Dodger fan at heart. At the end of that season, I went to my third Royals game ever (it was less than a two hour drive from my college town). I got to see Mike Sweeney, Jermaine Dye, Carlos Beltran, Johnny Damon, and Mark Quinn. After the home opener the next year, I was officially a Royal fan and, boy, has it been a rocky ride.

Anyways, here are three more Bo's that I did not have (Rod also included all three of his '87 rookies).

Since I grew up a Dodger fan in Royals territory, I knew a ton of Royals fans. I was able to trade Royals for Dodgers for awhile until I got so sick of hearing about the Royals that I started giving them away, mostly to my best friend, Dustin, and my cousin, Matt. Twenty years later, I still have a few Royals from back then, but I have hardly any George Brett's. Well, Rod helped to alleviate that problem. Here are a few that I know that I do not have.

That Donruss Threads card looked pretty cool to me until I looked at it closer. The Royals have never wore jerseys like that until last year. They always had Royals in white until the new alternates came out last year (unless this is just a bad picture where it looks like George is wearing blue instead of white). No wonder MLB was suing them.

Mixed in with the Brett cards was this sweet 1991 Spring Training schedule with Brett pictured on the front. 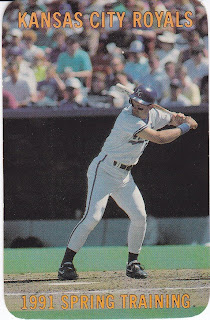 And last, but not least (and trust me, there were too many cards to post on here) was a 2008 Topps Update and Highlight card of Brett Tomko. I already had this card. The only reason why I am showing it is because I want to know why this card was even published. By the time Topps, series 2, was distributed, Brett had already been released by the Royals. So, why did they make a card of him in the '08 U&H as a Royal? He had pitched in six games with the Padres since his release from the Royals and the U&H came out after the season was over. Oh well. I guess this goes in the same book as why did UD make a 2009 card of Richie Sexson. 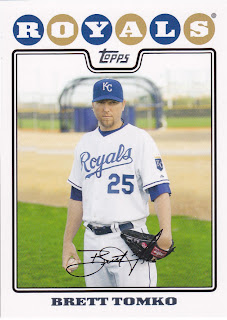 So, thank you Rod. As always, I am in dept to you.

That Joe Gordon card is from 1969. I know because I have the card.

Glad to know you at least used to be a Dodger fan. :)

Ya, I meant '69. I'm not sure where that 8 came from. Maybe because I have received a couple of '68s signed TTM recently. Thanks for spotting the error.

Good luck at the Royals game. I heard they renovated the stadium. Should be fun!

I try and put a piece of paper or something with the reciepents address in the package, in case for some reason the address on the front get wiped out. That is something that has happened a couple of times.