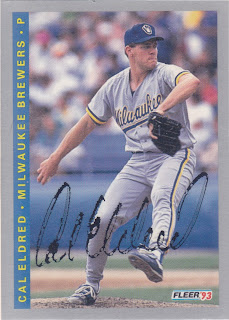 Apparantly, I screwed up. This card should have been posted yesterday instead of Kevin Bass. Oh well. I'm sure no one would have ever noticed if I had not brought it up.

Just like Carlos Baerga, here is another player that I thought dropped off the face of the Earth. He appears to have had arm problems in 1995 and 2001. He didn't pitch at all in 2002 (Tommy John surgery maybe?). But, he came back strong in 2003 with the Cardinals. That was the first year that he ever pitched exclusively out of the bullpen and he ended up appearing in 62 games with 8 saves. He was just as effective the next season. In 2005, he only appeared in 31 games. But, he posted his best ERA since his rookie season (2.19). I'm not sure if he got hurt again or what, but it is good to see him go out on top.

Like I said yesterday, this signature looks much worse than the Baerga (and obviously worse than the Bass). At least they both turned out better than the Tim Salmon. That is probably the worst looking signature that I ever got.
at 10:37 PM