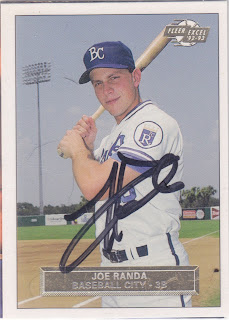 I got this card signed at Royals Fanfest this past January. I was always a fan of Randa, so it was great to see the Joker back in Kansas City. I didn't recognise him when I first saw him, though. His hair was much longer than it was in his playing days. Anyway, he singed all three cards that I had and even gave me one of the Royals provided 4"x6" cards that was also signed. I told him that it was great to see him back in KC and he said something of the sort that it was great to be back. I saw him on TV Friday at the Royals home opener, so I have a feeling that he is going to be a many more Fanfests.

As for the Baseball City Royals, they were only around from 1989 to 1992. They might have moved to Wilmington and became the Blue Rocks, but I am not really sure about that. This is the last minor league card from 1993. Back to the Majors tomorrow.
at 9:18 PM