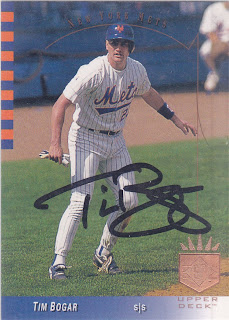 This is the final card that Tim signed for me last season in Kansas City when he was coaching for the Rays. For a refresher, you can see the first one here and the second one here.

It was hard for me to find three cards of Tim before I headed up to KC. This is one that I wasn't expecting to find since I had so few of them. Without digging out the box that I store these in, I would guess that I had bought maybe three packs of these premium cards.

They are a funky, but, good-looking card. It is hard to see the foil half circle going over the top of the picture that has a batman ear. The orange and blue half border give them the funky look that I was referring to. I have no idea why they felt that they had to put that line in the middle of ss. These were definitely some unique cards.

Does anyone know what SP stands for?
at 9:36 PM