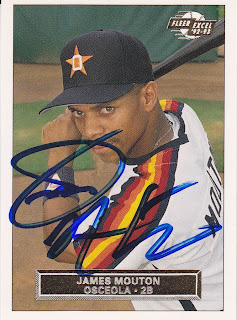 Here is another card that I got signed last week at the Astros Fanfest. James has a funky signature. I like how he signs his first name (or at least what appears to be his first name) inside of the J. His last name is impossible to make out. It look like there is a capitol H in the middle of his last name.

For a minute, I didn't think that I was going to get this card signed. The Astros had two alumni lines going at one time and they were each signing for 50 minutes. When I got to this line after being in the other line, I still had about 35 minutes to spare. When I finally moved up close enough to see the autograph table, James wasn't there. Terry Puhl was up there signing by himself. So, I started watching the Astros game, that I was missing, on a flat screen that I was next to. By the time I moved away from the TV, I looked back up at the table and James was up there signing. I guess it was a good thing that I got in the other line first.

This card depicts James as a Osceola Astro. This team is no longer a part of the Florida State League. For a short time, they changed their name to the Kissimmee Cobras. Their last season was in 2000. The Astros still use the ballpark for Spring Training, though.
at 9:19 PM

That is an unusual signature.

That signature rocks. And I don't usually like signatures where you can't make out the letters.

I remember James Mouton. His name flashes me back to other semi-prospects in the mid-90's. Chris Snopek, Phil Hiatt, Mark Clark, Rob Ducey, Troy Neel.

I like the pose. Minus the foil stamping, it almost looks like one of today's heritage/throwback sets.