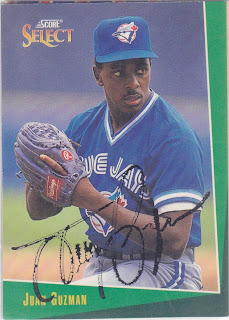 Out of the three '93 Selects that I got signed through the mail in the ear;y '90s, I think that this one turned out the worst of the three. After getting this one back, I ended up sending him another card to sign later in the year.

Juan was a very good pitcher in his first few years in the Majors. In his second season, he made the American League All-Star team and finished with a 16-5 record with a 2.64 ERA. The next season, he recorded 194 strikeouts. His ERA ballooned the next couple of seasons, but bounced back in 1996 with a 2.93 ERA (but with an 11-8 record). He struggled the next couple of seasons and started to bounce around a little bit. He made one start in 2000 with Tampa Bay and got lit up. That was his last appearance in the Major Leagues.
at 7:03 PM

They were some good looking cards.