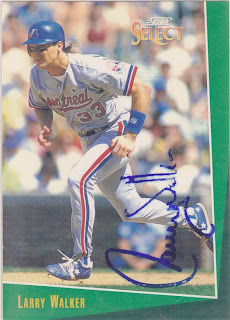 Here is another early '90s card that I got signed through the mail. One thing that I always thought was weird is how the card is signed sideways. This was probably the first time that I had ever seen that before. Baseball Almanac's signature is also sideways. There's turned out better since the card they used wasn't as glossy as mine. The next two cards that I'll have on here look about the same because of the gloss. The third one was signed a week and a half ago and looks much better.

As for Larry Walker, I got this card signed early in his career. I remember going to some Rockies games towards the end of his career and hearing horror stories about him tearing cards in half. I have no idea if there is any truth to those stories or not. Has anyone else heard or read about his signing habits?

Well, my Royals fell to the Indians today, but I had a lot of fun. I was having a ton of fun until Kyle Farnsworth came in to pitch. But hey, that's baseball. Unfortunately, I spent too much time trying to get autographs that I didn't have much time to explore the renovated ballpark. I made one quick lap around the new outfield area, checked out the new Dick Howser statue, and then headed up to the upper deck to get a quick bight to eat and find a seat. But, it turned out to be a nice day and I came home with a very slight sunburn and seventeen autographed cards, including two from Kerry Wood. Plus, I think that I saw Mike Jacobs hit the longest home run that I have ever seen at that ballpark. So, even though the home team loss, it wasn't a bad day at all.

Unfortunately, I wasn't in a picture taking mood and I only came home with two new pics. I thought that this one was the better of the two. 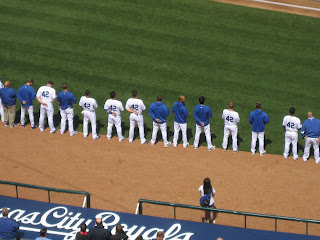 Here is the other one. Everything in this picture is brand new except the fountains, the lights, and the video board (it was put up last year, but its crown is new). 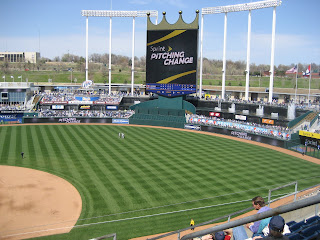 I got seventeen sigs from seven different players/coaches. I was able to double-up on everyone except Kevin Seitzer.

Yeah that is quite impressive. During BP?

Were the new seats in the OF distracting to look at? It'd be cool to sit by the fountains, but aesthetically, I don't know, maybe a little less pleasing?

Yep, I got them all during bp. I wasn't expecting bp for the day game, but both teams took it. I got autos from two Royals players, two of their coaches, and three Indians palyers.

As for the seats, I really didn't notice them while any action was taking place. It was very cool, though, to be able to walk around the ballpark and stand directly above the fountains with only a railing to keep you out of it.

Must be nice to go to a ML game and have a decent shot at getting an autograph. At CitiField, you'd have to get very lucky to have a chance to ask anyone to sign a card.

I know what you mean. That is one of the advantages of Kauffman Stadium and Kansas City. You can get there 15 minutes before the gates open on a weekday and still get a decent spot for autos. On the weekend, you have to get there a little bit earlier.

The last two MLB parks that I have been to weren't as accomadating as the K, though. There is this little niche in KC by the home plate side of the dugout that I haven't seen in other parks. That is the place to be at a Royals game.

But, I am sure that the problem at Citi is the number of people. I went to 15 Braves games in 2004 and 2006 and I would never even bother to try get autos there. There was just too many damn people.