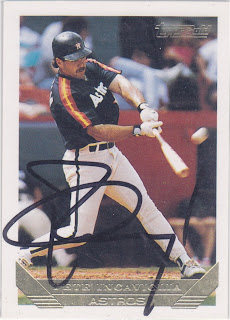 Here is the second card that I got signed by Pete before game one of the American Associations championship last year. Pete is the manager of the Grand Prairie AirHogs. The first card, his '87 Topps rookie card, can be seen here.

Speaking of that last card, when I first got my site tracker working on this blog, I noticed that I was getting a rather large amount of traffic directed straight to that card. Being new to analytics, it took a few weeks to figure out most of the stats they tracked (I still don't know how utilize all of the stuff on there). Eventually, I figured out that I was getting traffic directly from the AirHogs webpage. I thought that that was odd, so I headed over to it to investigate. After a short search, I found what I was looking for. They had a news article called "AriHogs in Cyberspace". Someone would look around the web for stories about different 'Hogs players, probably just to kill some time during the off-season. At the very bottom of the page was a reference to my blog. It was only a one line shout out, but it did have a link to my blog and to the Inky rookie card. I thought that was pretty cool. If you go to the bottom of this page, you can see what I am talking about.
at 7:00 PM

Nice! I'm about to send off a '92 Upper Deck and a '92 Stadium Club to Incaviglia. I didn't know he was in Grand Prairie. You might have just saved me a 'Return to Sender'. Thanks!

I second that! I had no idea where Incy was and am not too surprised to find out he is a manager. I have an O's card to send to him too.
That's some great detective work Zach.

Glad that I could help you guys out.