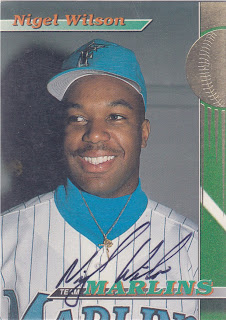 Here is the first Marlin, not just on this blog, but for the franchise. Nigel was the first pick for the Marlins (second pick overall) in the 1992 expansion draft. While the Marlins had drafted some players in the regular draft before this, I've always considered Nigel to be Marlin number one.

I got this card at Wal-Mart a long time ago. This card was packaged alone and signed and cost around ten dollars. The only other card that they sold like this was the Soaring Stars Robin Ventura.

I guess that this card came from a team set. I don't have any other cards that look like this and the design is different than the regular Stadium Club.

As for Nigel, he never really accomplished much in the Majors, let alone for the Marlins. In 1993, he went 0 for 16 with 11 strikeouts for the expansion Marlins. In 1995, he went 0 for 7 with the Reds. In 1996, he finally got his first big league hit and ended up 3 for 12 with the Indians. That was his last stop in the Majors. After that, he went to Japan. According to Wikipedia, he had a very successful career there.
at 11:10 AM

Cool. I remember an Eric Karros one like that too.

That's from the team sets that Stadium Club issued separate from their regular set. I have a bunch of '93 team Stadium Club Dodgers.

I also have a couple of Rangers from some repack box. But key ones (Ryan and Canseco).