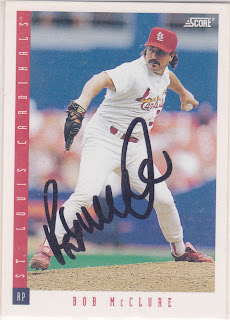 For some reason, I posted the Select cards before the Score cards. I'm not sure what I was thinking there.

Anyway, here is the third and final card that I got Bob to sign for me last year by the Royals parking lot. So far, that is the only success that I have had with him. I've asked him to sign four or five other times without any luck. I will keep trying, though. I have a card of him as an Angel and a Met that I want to get signed. Plus, I just picked up a '78 Topps card of him that I would like to get signed. He doesn't have a mustache on that card.

Bob had a long career, primarily as left-handed specialist. He never made an All-Star team, but he did pitch for 19 seasons. While his career might have been unspectacular (I don't even remember him as a player), I do enjoy him as the Royals pitching coach. He has been the best coach that the team has had in a while.

You can see the previous two cards here and here.
at 6:21 PM