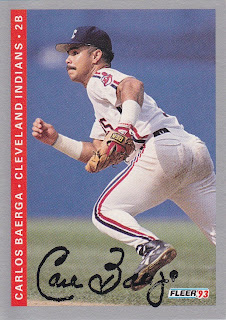 Here is another through the mail success from the early '90s. Carlos was a very good second baseman early in his career. He was a three-time All Star and had four consecutive seasons with over 80 RBI (two of those were over 100). That was pretty impressive for a second baseman in the early '90s. Today, it is not that unusual.

By the late '90s, I thought that Baerga was washed up. I was amazed one day in 2003 when I saw him playing for the Diamondbacks. I thought that he had been out of baseball for years (which was only partially correct). He had a pretty good season that year when he posted a .343 average while mostly coming off of the bench. He ended up playing into the 2005 season. He now does some work for ESPN Deportes.

I mentioned last week how similar the '93 Classic/Best looked like the '93 Fleer. The only difference is that the C/B card has a strip on the bottom for the name and that the vertical strip is on the opposite side. What are the odds of two companies coming up card designs that are so similar?

On a side note, I got a card in the mail today from Ryan of The Great Orioles Autograph Project. If you have never been by his blog, check it out. He just recently started it. He is trying to get a card signed by every Oriole that ever played. I'm looking forward to seeing his progress. As, for the card he sent me, I will post it after I finish up with the '93s. Thanks Ryan! I think I might have a card for you. I'm going to wait a few days and see if you already have it.
at 4:41 PM