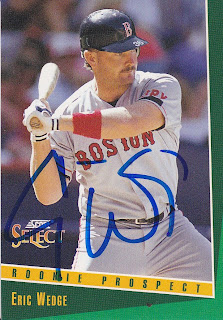 Here is the second autograph of the Indians manager that I have shown on here. The last one that I posted was just over two weeks ago. That was the day before I left for Houston to see the Inians and Astros play a preseason game. Well, at that game, I got Eric to sign three more cards for me.

I wasn't impressed with the setup in Houston in regards to getting autographs. There really wasn't a good place to stand for someone trying to get cards signed. If I wanted to get some balls signed, I could have just stood anywhere behind the dugout. So, I just went to the outfield side of the dugout to try to get some pitchers to sign after they came in form BP. As soon as I got over there, Eric headed to the same place I was at to talk to a buddy of his. It was an interesting conversation to listen in on. Apparently the guy was a childhood friend of Eric's (he told his son that they played little league together). The friend asked him if he ever makes it back to Ft. Wayne and Eric said that he did once or twice a year to see the folks. Then he asked Eric how the team was going to do this year and Eric didn't really know what to say. He basically said that they have the talent, but they need to pull it together. They were pretty sloopy in their final games in Arizona and were hoping to get it all worked out in Houston before the season started.

Apparently, that didn't happen as they started the season 1-5. But they seem to be rolling now, at least offensively, after scoring 22 against the Yankees tonight.

Also, look how nicely this card looks signed after sitting around for 16 years. It looks much better than the previous Score Select cards.
at 9:59 PM