I stopped by the card shop to get some sheets and was surprised to find some '09 Goudey. The first thing I noticed was the price. They were $5 a pack with 8 cards per pack. Boxes were $75 dollars for 18 packs. To me, that seemed a little steep when compared to Topps Heritage. Maybe that is just me, though. But according to the box, there is one game-used card and one autograph per box, on average.

I ended up getting five packs of the stuff. No autograph or relic for me today. Overall, I think that the design is bland. I deffinitely like last years better. Here are nine ramdomly selected cards that I got. 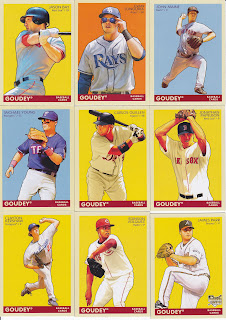 I also got two minis. The Aviles card was the only Royals that I got in the packs. I wish that I would have had it yesterday so I could have got it signed. Both of these are blue backs. 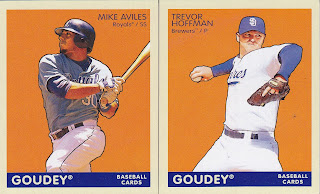 I also got two Sports Royalty cards. I'm guessing that these are short prints. The Bird card uses the exact same photo that was used in last years set. Nice work UD. 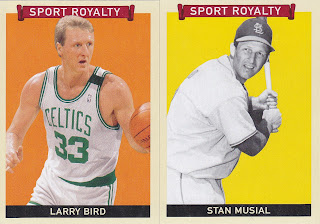 Here are the two big head cards (that's what I call them at least) that I got. Nothing too special there, although I do like the little devil on Pedroia's card. 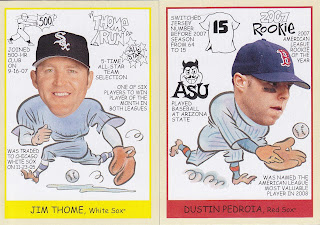 I only got one base card of a retired player and it is of Dave Concepcion. I think that it is the ugliest card that I got today. There just isn't any depth to his face. 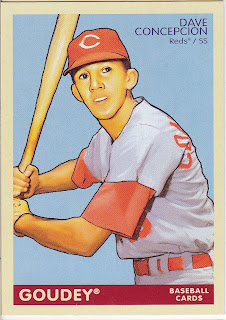 I think that this is the first 2009 card of Ken Griffey as a Mariner, part 2. What I don't understand is why they put Griffey with his new team, but not Trevor Hoffman. 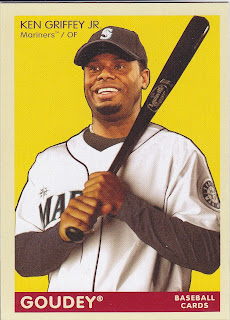 The last thing I have to show is a 4-in 1. That is what it is called on the back. I'm not sure how these things go as far as SPs or whatnot. I only got one of them, but the card shop owner pulled two out of one pack. Check out how much more detail is put into Jeter's face compared to Yogi's or Concepcion's. 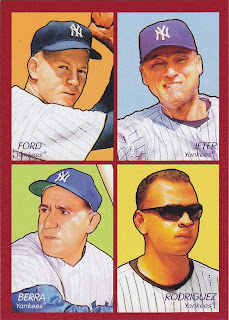 That's it. The highlight for me was the Aviles card that I got in the last pack. I might go pick up some more of these tomorrow.

Also, when I got home from the card shop, I had this card waiting for me in the mailbox. 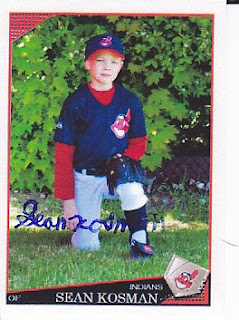 This card and a thank you note were sent to me after I sent Sean about a dozen old wax packs. I figured that he would enjoy opeing some ftuff that was older than he was. Sean's father, Paul, runs Wrigley Wax and when Sean broke his arm, Paul set out to make him feel better by asking other people to send Sean some cards. He apparently gets jealous of his dad always getting cool cards in the mail and Paul thought that this might cheer him up. If you haven't already, I'm sure that Sean wouldn't mind some more cards. Thanks for this one Sean!
at 11:00 PM

Wow, that Concepion card is spooky.

I'm not a fan of Goudey. I like the big-head cards, but that is absolutely it.

I haven't seen them in person yet, but I am still liking the Goudey this year. Poor Davey doesn't look so good on his card, but he's one of my faves, so I'm glad he's in the set.

I do agree with Night Owl, the heads up cards are pretty fly.

Just like the past two sets, these are just beggin' for some signatures.

Thanks for helping me save some money.

If they were $2 a pack, I'd buy a few packs because they aren't glossy and overlook the fact that I don't really like the design.

Sigh... twenty years ago, Upper Deck was making the best cards on the market. Where did the time go?

yeah, thanks for spending the money so I don't have too.
Sorry, but yuck.

Wow, these are getting destroyed.

Yeah, I can admit, the Concepcion card was butchered pretty bad by UD, and the reuse of Sports Royalty is embarrassing.

But other than that, I like these. Yeah, in a creepy, melting-wax-museum kind of a way. But I like them!

"Melting-wax-museum kind of way"--
Great description!! I loved it.