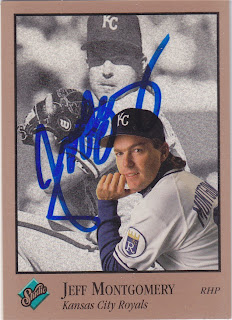 The first thing that I notice when I look at this card the is the senior photo-like pose. How cheesy. Other than that, I always liked the Studio cards. They were always a little different and had interesting facts on the back rather than stats. For instance, here's some of the stuff from this card:
Hobby is playing with gadgets...Favorite singer is Elton John; actor is Kevin Costner; movie is Top Gun; book is A Whole New Ball Game; talk show host is Johnny Carson...Pat Tabler is his closest friend in baseball...Would like to meet Elton John.
You just can't find that kind of information on a card anymore.

I got this card signed at Turkey Bowl IV, the charity flag football game, in 2003. That was the same year that Jeff was enshrined in the Royals Hall of Fame. He racked up 304 saves as a Royal, had a career high of 45 in 1993, and was a three time All Star.

The Royals got Jeff in a trade with the Reds for Van Snider. That may be the best trade in Royals history.
at 7:49 PM

Those Studio cards were definitely different. I'm not a big fan of the senior photo poses either, but the card backs are definitely interesting.

I always assumed that collectors liked these cards. Sometimes cheesey, yeah, but sometimes very cool. The 1991 Ozzie Smith is my favorite card of all time.