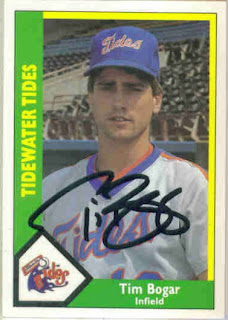 I got this card signed this past summer at a Royals game. Tim was the Quality Assurance coach for the Tampa Bay Rays. In his playing days, he was mostly a utility player for the Mets, but he did get some decent playing time in his two years with the Astros. This is the first of three cards that he signed for me. At the game, he was the last player/coach off of the the field. He signed for quite a few people (though most people probably didn't know who he was).

This is the last card from the CMC set. I know very little about these cards. They are nice looking and are pretty glossy for 1990 standards. The backs are colorful and include a head shot taken from the card front. I have no idea what CMC stands for and I haven't seen another set made by them. Interestingly, these cards came in packs that also included Procards. CMC made the AAA cards while Procards was AA and A.

This card shows Tim as a Tidewater Tide. The team is now called the Norfolk Tides. They ended a nearly 40 year affiliation with the Mets a few years back and are now with the Orioles. The card before this one showcased a Syracuse Chief card. That team is still the Syracuse Chiefs, but they spent about ten years as the Sky Chiefs to lose the Native American moniker. Now they are the Chiefs again, but their logo is a train. Their long affiliation with the Blue Jays just ended. The two cards before that featured Richmond Braves. The Braves are in the process of leaving Richmond and are going to be playing in the Atlanta suburb of Gwinnett County next season. And, the first card of this set had an Indianapolis Indian. That team hasn't changed much since then besides their logo and affiliation.
at 12:45 PM

Nice to learn what Tim Bogar is up to these days.