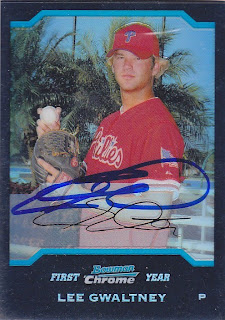 Here is a card that I got signed last year when I made a ballpark visit to Lincoln, Nebraska's Haymarket Field, home of the Lincoln Saltdog's. My main focus on the trip was to get autographs from the Ft. Worth Cats Aaron Crow and Wayne Terwilliger. But, I had a few cards of a couple other guys and obviously Lee was one of them. Since he wasn't pitching that day, Lee was one of the last guys out of the clubhouse. When I asked him where Terwilliger was, he told me that Wayne had a staff infection and didn't make the trip.

Lee was drafted by the Phillies in the 6th round of the 2002 draft out of Louisiana Tech. He reached as high as AA in the Phillies organization before making his way to the Cubs system in 2005. He played in three different levels that year and he must have injured himself at some point because in 2006, he only pitched in three games with the Arizona League Cubs.

He found himself pitching for Ft Worth in 2007 and, aside for a stint in the Mexican League and two starts for the San Antonio Missions, that was where Lee's career ended in 2009. At least I am assuming it has ended since I can't find any 2010 stats for him.