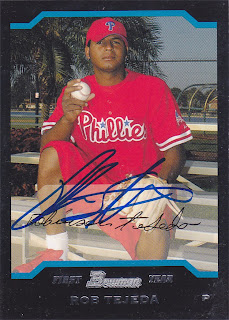 Rob, or Robinson as he goes by now, Tejeda is easily the most established player from which I have got a signed '04 Bowman card. He broke into the Majors in 2005 with the Phillies and has played at least 14 Major League games every year since. He currently is one of the set-up men in the Royals bullpen and I got this card signed by the Royals parking lot prior to a game in April of 2009.

Robinson was signed by the Phillies when he was 16-years old in 1998 and made his professional debut a year later. He played in rookie or A ball for the first five seasons of his career before making it to AA in 2004. He played in AAA in '05 for five games before getting called up to Philly in May. He would stay with the big club for the rest of the season before being shipped to Texas for David Dellucci.

Robinson's tenure with the Rangers must have included a bus pass, because he was constantly up and down I35 from Arlington to Oklahoma City. In his two plus years as a Ranger, he made 35 appearances in the Majors and 30 in the minors. He had been a starter for most of his career, but in '08, the Rangers moved him to the bullpen. After four appearances out of the pen in '08, Robinson was claimed off waivers by the Royals and, aside for three rehab appearances last year, has been a legitimate big leaguer ever since.

Working out of the pen with the Royals, with a handful of spot starts, Robinson has posted a 9-9 record with a 3.47 ERA and 184 strikeouts in 174 innings of work.

Robinson's signature has shortened a great deal since he signed his first contract with Topps.
at 5:56 PM