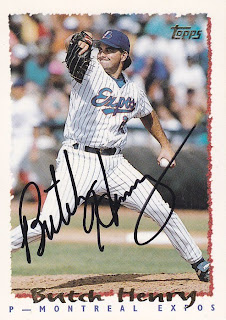 Here is the second of three cards that Butch Henry signed for me at a Wingnuts game in August while he was managing the El Paso Diablos.

Butch pitched in the Majors for seven seasons with four different clubs. He pitched one year with the Astros, half of one with the Rockies, two and a half with the Expos, two with the Red Sox, and one with the Mariners. When he was all said and done, Butch finished his career with a 33-33 record with 7 saves and a 3.83 ERA. That is not too bad for a guy that bounced around as much as he did.