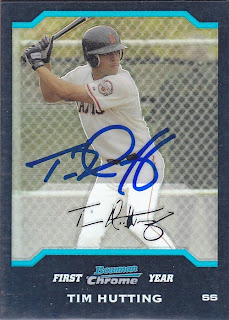 Here is a card that I got signed at a Wingnuts game earlier this year. Tim played for the Sioux Falls Pheasants this season and I was able to get this card signed in May.

Tim was a eighth round draft choice of the Giants in 2003 out of Long Beach State (that would make Tim a Dirtbag). He signed early enough to play in 64 games in the Northwest League that year. He played in the South Atlantic League in '04 and had made it up to AA in '05. He spent '06 split between high-A and AAA and that ended up being his last season playing affiliated ball.

In '07, he played for the Joliet Jackhammers of the Northern League before joining Sioux Falls in '08. He has played for them ever since. He finished up this last season hitting .307, the highest average he has had in the minors.

For those of you keeping score at home, this card is a refractor.
at 12:45 PM

Dirtbag? Not a Long Beach State fan, or is that a nickname of theirs?

LBSU is officially the 49ers, but for some reason, the baseball team prefers to go by Dirtbags.