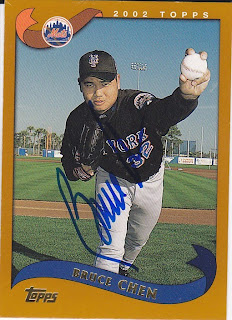 Here is the second card that my buddy was able to get signed by Bruce at a Royals game last month. You can see the first one by scrolling down a bit.

In the last Bruce Chen post, I mentioned Bruce's rally cry of "C'mon Chen!". Apparently, Will Ferrell was at a Royals game during the summer on a day when Bruce was pitching. He and his gang were in one of the dugout suites and the Royals on-field commentator was in there with them. So, throughout the game, they would cut to the dugout suite and talk to Will and company. During one of the scenes, out of nowhere, Will yelled "C'mon Chen!" and a monster was born.

The rally cry grew quickly and the Royals almost gave out "C'mon Chen!" t-shirts (the design barely lost in a fan vote). But every start after that game, "C'mon Chen!" cries were to be heard and Bruce was ready to take charge. And take charge he did by winning a team high 12 games and pitching his first Major League shutout. For the first time in his career (the Royals are the tenth team he has been with), Bruce may have found a home with the Royals.

Somehow this card got rotated a bit while I was scanning it. Fortuntately, with Bruce being the crafty lefty that he is, I'm sure that he'll have straightened it out by the time you read this.
at 12:50 PM