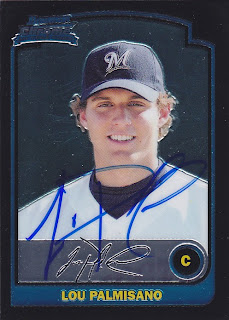 Here is another card that I got signed at the American Association All Star Game. Lew was the starting catcher on the South squad and I was able to get this card signed during the pre-game festivities.

Lew was a thrid round draft choice by the Milwaukee Brewers in 2003. He made his professional debut that season with the Helena Brewers and he hit .391 in 174 at-bats. But the next season, while playing in low-A, his batting average dropped almost 100 points. It dropped again the following year in high-A, but he still got moved up to AA in 2006. He spent two seasons at AA hitting around .250. Then, he must have got injured. In 2008, Lew only played in 27 games and they were spent in the Arizona League and the Florida State League.

In 2009, Lew joined the American Association and the Sioux City Explorers. He was hitting .257 for them before being dealt to the Pensacola Pelicans, the team he played for in 2010. Lew finished up his All Star year batting .347 for the Pelicans and he now is officially a free agent. Hopefully, his strong 2010 will get him back into affiliated ball.