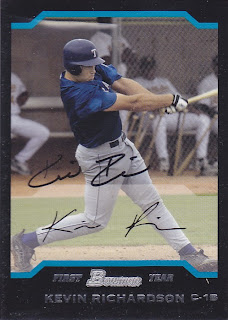 Here is a card that I got signed at an Oklahoma Redhawks game in 2008. I spent most of my autographing time at that game on the visiting team's side, but I was able to get to the Redhawk side in time to get a couple of cards signed prior to the start of the game. That was when I got this card signed.

Looking back on it now, I'm amazed that I even owned this card to get signed. That was back before I knew about checkoutmycards.com and I was only able to get cards signed that I actually owned or could find at the local card shop (or overpay for on Ebay). I have twelve cards signed from this set and four of them were given to me. I got this card out of a pack and the other seven cards were all purchased from checkoutmycards.com. That is how much I rely on their services.

Kevin was a non-drafted free agent out of Gonzaga in 2002. He played in the Appalachian League that summer and hit to the tune of .157. The Rangers brought him back the next season and he split it between the Northwest League and the Midwest League, hitting a combined .251 for the season. He spent 2004 in the Midwest League and repeated in again in '05 before getting moved up to the Texas League mid-season. He spent '06 and '07 in the Texas League before moving up to AAA in 2008. He spent all of '08, most of '09, and part of '10 playing for the Redhawks. But during that time-span, something great happened.

On August 17, 2009, Kevin made his Major League debut in Arlington against the Twins. And to add a little personal touch to this post, I was actually at that game (unfortunately, I don't have any pictures of Kevin from the game, but my ticket stub is at the bottom). Kevin went 2-4 in the game with a run and a strikeout. It was the only start in his brief Major League career. After that game, Kevin got into three more games and he got two more at-bats, finishing his stint 3-6. I know that he would have liked to have stayed up longer, but if he never gets another Major League at-bat, at least he can say he hit .500 in the big leagues.