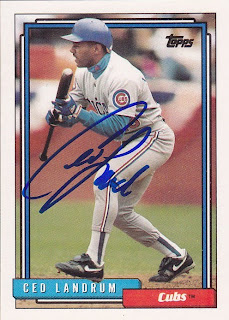 Here is the second and final Ced Landrum card that I have to post on here. If you missed the first one, scroll down one post.

When Ced was leaving the field the day he signed my cards, he had his daughter with him. She was probably in middle school and was carrying around a softball. I've seen a few players/coaches at the park with their boys before, but that was the first time I've noticed a daughter. I thought it was pretty cool that she was with him and was obviously into baseball/softball and was even on a road trip. You don't see that too often at games.

I'll get one more post up later tonight and then it will be back to one post a day for a a couple of days.
at 4:00 PM