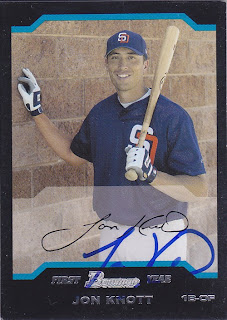 This is a rarity at Autographed Cards. This is an autographed Padres card that was not given to me by Rod, of Padrographs. This one was actually given to me by Matt of Heartbreaking Cards of Staggering Genius and A Pack to be Named Later fame. If I remember correctly, he got this card in a lot that he bought off of Ebay.

Jon has 31 Major League at-bats on his resume and they were spread over three seasons and two teams. Jon made his Major League debut with the Padres on May 30th, 2004 and he popped out to the catcher. He finished the season 3-14 with two doubles and an RBI. He spent all of 2005 in the minors, but he got another call up from the Padres in September of 2006. He only got three at-bats during that call up and he went 0-3. Following that season, Jon became a free agent and he took his skills to the Orioles organization.

It was with the Orioles that he got his final Major League stint and he probably had his biggest highlight with them. In his first game as an Oriole, Jon hit his lone Major League home run. It was a pinch hit three-run shot off of Brian Stokes of the Devil Rays in the eighth inning. It didn't win them the game or anything, but it certainly got the team back into it and gave them a chance to come back (which they didn't do). Jon ended up finishing the season 3-14 with 3 runs and 4 RBI.

After that, Jon played a couple more seasons at AAA for a couple of different teams. It looks like 2009 might have been his final season since I cannot find any 2010 stats for him anywhere. He spent last year split betwwen the Pacific Coast League, the Mexican League, and the Atlantic League (where he spent most of the season).
at 4:45 PM