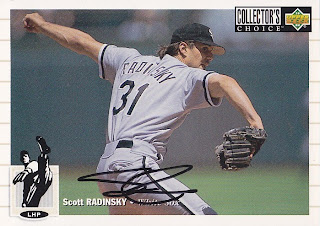 Here is the third and final Scott Radinsky card that I got signed last month. Just scroll down a bit to see the other two.

Unfortunately, I could only find cards of Scott as a White Sock. He played for the Dodgers, Indians, and Cardinals, too, but I only have White Sox cards of him. It looks like there wasn't any cards of him as a Cardinal or Indian, but there are a couple of cards out there of him as a Dodger. But, those cards came out when I wasn't collecting, so I obviously have none of them.

According to Wikipedia, Scott is one of the best Jewish pitchers in the history of the game, he is in a punk band, and he owns a skate park and skateboard museum. That is quite a resume.
at 7:28 PM