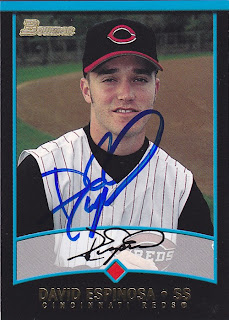 Here is a card that I got signed at the American Association All Star Game in Wichita this summer. David was on the South squad and he was representing the Grand Prairie AirHogs.

I've been to two All Star games in Wichita (the other was the 2003 Texas League game) and both had a skills competition before the game. The weird part about it was that both games had the same strange competitions. They both had the home run derby (the one normal event), a relay throw race, and a blindfolded catchers throwing competition. Since the Wingnuts and Wranglers are in no way, shape, or form connected to each other, I thought that it was strange that both clubs had the same events. It must be a Wichita thing.

Anyway, David was a participant in the relay throw race and his team took first place and each was awarded a fifty dollar cash prize. I was able to get this card and a couple of others signed right after the competition was over and David looked pretty happy to have won the cash.
at 3:44 PM