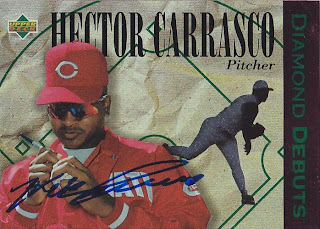 Here is a card that I got signed at the American Association All Star game in July. Hector was representing the eventual league champions, the Shreveprt-Bossier Capatains, at the game and he was nice enough to sign all three cards for me. I will post the second card on Monday, but it might be another year before I post the third card. It's from 2007.

Hector pitched in the Majors for parts of twelve seasons. During that time, he played with the Reds, Royals, Twins, Red Sox, Orioles, Nationals, and Angels. He played in 647 Major League games and posted a record of 44-50 with 19 saves while compiling a 3.99 ERA and 662 strikeouts.

He last pitched in the Majors in 2007, but he is obviously still playing ball. He pitched for the Iowa Cubs in 2008 before moving on to the Atlantic League in 2009. He played for three different teams last year before heading to the American Association this season.
at 12:17 PM

I wondered if Carrasco was still playing this year.

I love the card - any autographed card that shows the player signing autographs is awesome.