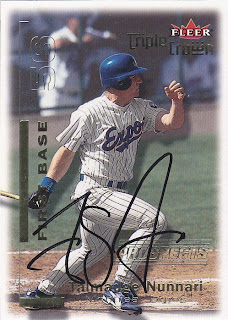 Here is a card that I got signed at the American Association All Star Game earlier this summer. Talmadge was the manager of the South squad and I was able to get him to sign this card during the pregame festivities. While he was signing the cards, he made sure to grab a couple of players from his Pensacola Pelicans team to show them the card and he made sure to point out to each of them that the card listed him as a prospect. I thought that was pretty funny.

Until ten minutes ago, I had just assumed that Talmadge was just a career minor leaguer. But, that was not the case since the Expos made him a September call-up in 2000. In his short tenure with Montreal, he appeared in 18 games and went 1-5. While that does not seem all that impressive, keep in mind that he also had 6 walks and a sacrifice fly. So, he at least has some quality at-bats and he can tell everyone that he retired with a .583 Major League OBP.

I have one more card to post of Talmage and that should be coming up tomorrow.
at 4:02 PM