Last night, I went to a Ft. Worth Cats at Lincoln Saltdogs game. I originally wanted to go to this game to get Wayne Terwilliger's autograph on a 1950 Bowman card that I have of him. Wayne is the 82 year-old first base coach for the Cats. But, according to one of the Cats, Wayne has a staff infection and didn't make the trip. But, I was able to meet Dave from Goose Joak and his wife, Val. So, that made up for missing out on Wayne.

A little over a month ago, I mentioned to Dave that I may head up to Lincoln for that game and we both thought that it would be cool to meet up. A few weeks later, I was looking over the Cats roster to see if there was anyone on the team who had some cards readily available that I could get signed. The one name that stood out to me was Aaron Crow. Aaron was drafted ninth overall last year by the Nationals, but was unable to come to terms on a contract with the team. So, he will re-enter the draft next month and in the meantime, he is pitching for Ft. Worth to stay in shape (just like Luke Hochevar and Max Scherzer have done). So far, he was pitched eleven scoreless innings to start out the year and was the American Association pitcher of the week last week.

Obviously, there aren't any mainstream cards of Aaron available (sorry, I don't count Razor as mainstream). So, I started a little correspondence with Dave to get him to make me an Aaron Crow card. I may have been a little bit demanding in my request, but Dave was up for the challenge. Actually, he was so into this card that he wanted to make a back for it, too. So, I told Dave what I was looking for and sent him a few links for some stats for the back of the card and Dave took care of the rest.

Here is what he came up with. 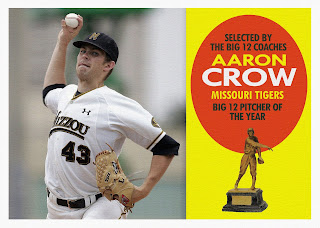 And here is the back that he made. 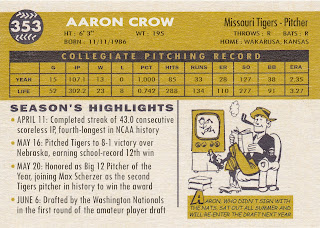 For me, the hardest part of all of this was getting the front and back lined up and glued together. I have cut out some of the GJOs this year and I thought that it was a simple task. But when I had a front and a back that had to go together, I noticed that it was incredibly hard to get the corners cut at perfect right angles. I ended up having to use a t-square to get everything cut as close to square as I could. While it's not perfect, it is passable for a baseball card. I even included a checklist in the middle to give it a baseball card-like thickness.

Here is what one of the signed cards came out looking like. 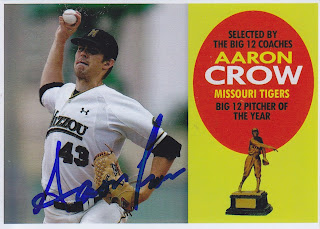 My buddy, Dustin, was able to get another one signed for Dave. So, there are only two of these in existence. But, feel free to make your own if you are a fan of Aaron or might see the Cats play sometime this season. I don't think that Dave will mind.

I had a prototype card that I made that was of lesser quality. I offered it to Aaron, but he declined. I guess he doesn't know good work when he sees it.

So, it turned out to be a good day at the ballpark. I got Aaron Crow's signature. I got to meet Dave. I was able to take my Dad to a game on his birthday. I went to a beautiful ballpark that I hadn't been to. The only negative thing was the rain delay that we all skipped out on and ended up missing an uneventful ninth inning.

You're right, I had a great time making that card. It's one of my favorites, by far. My favorite part is the comic on the back -- pure genius on your part. The phrasing is perfect, too.

And it almost goes without saying, but thanks again, and same goes for Dustin. We really had a great time at the game meeting you.