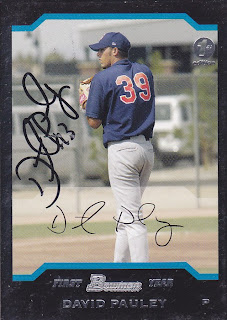 Here is another Padrograph of I guy that I had never heard of. Because of that, I just assumed that he had never appeared in the Major Leagues. Well, you know what happens when you assume things.

It turns out that David made three starts in 2006 and had six appearances in 2008 for Boston. I wouldn't have felt bad about not knowing a pitcher that had less than ten appearances for the Red Sox, but it turns out that David pitched in the Major this past season for Seattle. This year, in nineteen appearances (fifteen starts), David went 4-9 with a 4.07 ERA. While that doesn't sound great, keep in mind that with Boston, David was 0-3 with a 9.53 ERA. So, while he is not battling King Felix for the number one spot, he has made some improvements since his Boston days and he may be in the running for the M's starting rotation next season. Of course, that is all just speculation since I really do not know anything about this guy.

I just noticed a half hour ago that this card is a "1st Edition". I had no idea that Bowman ever messed with the first edition stamp. But, being a Topps brand, it really doesn't surprise me.
at 5:30 PM