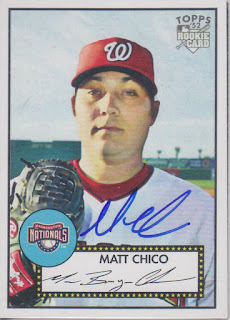 Here is the second card that I got signed by Matt Chico at a Wingnuts game in 2012. For a few seasons, the Can-Am League and the American Association both had an odd number of teams in the league. To combat that problem, the leagues did year-long interleague play so there wasn't a team in each league with a three to four day long off stretch. Because of that, I got to see the New Jersey Jackals play a couple of times and that is who Matt was with when he signed for me.

The first card I posted of Matt was his '07 Bowman Heritage card and it can be seen here.

In that last post, I talked about Matt's rookie season in 2007, where he went 7-9 with a 4.63 ERA. In his second season, things took a turn for the worse. He started the season in the rotation. After getting a no decision in his first start, he went on to lose five straight starts. He had one quality start over that span and failed make it into the fifth inning in the two last starts. He made one more start, where he got a no decision over 4.1 innings, before being demoted to the bullpen.

Things got a little better in the bullpen. He made three appearances out of the pen and pitched 6.1 innings and only gave up one run. His efforts got him a second chance in the rotation and he gave up four runs over five innings of work. After that, he was shut down for the season for the Nationals. He made one AAA start and that was it for his season. He ended up having elbow reconstruction surgery and would be out until mid-season 2009.