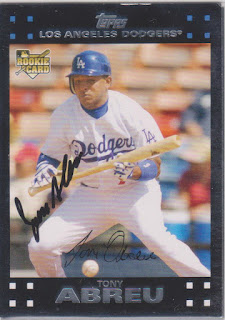 Here is a card that my now wife got signed for me at an Oklahoma Redhawks game in 2012. We went down there on a Sunday just for something to do and to see the Royals AAA team play. My wife had never helped me 'graph up to that point, but that all changed that day. Like it or not, she was going to help me out that afternoon.

She had no idea what she was doing, but I was with her to help her along. We settled in next to the Storm Chasers dugout and waited for them to exit the clubhouse. I called a couple of guys over to show her how it was done. Then the starting catcher, Adam Moore, made his way to the dugout. She hollered for him was he was gearing up. He said he would sign in a bit and she felt completely rejected. Next, Tony Abreu appeared and she yelled for him. He, too, said he would sign later. At that point, she was zero for two and had had enough. She threw a little tantrum and told me how dumb this was and that she didn't ever want to do this again. I just laughed at her and told her to chill out because this is how it is. Once guys started coming out of the dugout to warm up, they started to sign a bunch and she eventually got back in on the action.

It was a rough start for her, but she still continues to help me out whenever she can to add autographs for my collection. It must be hard to be married to a person with such an eccentric hobby, but she puts up with it and does what she can to contribute. I am so lucky to have her and I love her so much!
at 9:54 AM