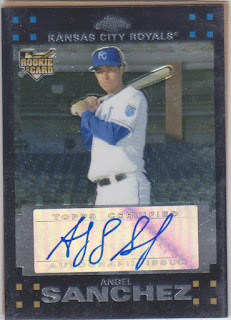 Remember back in the day when there where far fewer card blogs and a lot more contests? Honestly, I have no idea if either of those statements is true, but it seems like it was really like that back in 2009. Or it could just be that there are so many cards blogs out there that it is impossible to keep track of everything that is going on. Whatever the case may be, I rarely see contests myself and enter only a fraction that I do see. Until the last couple of weeks, I never had the time to update this blog the way I wanted to, let alone check out what is going on with everyone else's blog.

What is the point of my rambling opening paragraph? No, I am not having a contest. That will have to wait until the end of May when the college baseball tournament starts. The point is that I think I won this particular card in a contest back in the day. I stress think because do not remember exactly how or when I got the card. All I know is that it is from Team Phungo out in Philly. I thought I may have won it in the best contest ever held, Spot the Sig, but I never won STS. So, like I said, I have no idea why deal sent me this card, but he did and my collection is better off because of it.

When I got this card, I was a little surprised because I did not realize Angel Sanchez even had a card made of him. Being a Royals fan, I knew of him in the minor leagues. But, I never realized he ever got called up to the Majors to warrant a rookie card. Guess I wasn't that good of a Royals fan at that time. He did only play in eight games as a Royal, though.

On a side note, I accidentally posted a card from 2008 yesterday. For some reason, that Molina card, and another card, ended up with my '07s and I posted a card out of order. You guys are supposed to catch that stuff for me.
at 10:26 PM