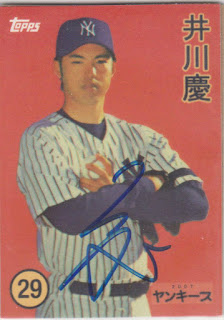 I absolutely love this card. It comes out of a Wal-Mart exclusive insert set that basically puts a player on an older card like Topps Heritage or Archives does. Most of the cards are really uninspiring because of that, though some of the cards are not based on Topps cards. This one uses a non-Topps, old-looking Japanese card. On the back of the cards in the insert set, it lists which card set the card is imitating. It is usually specific for the old Topps sets, but not for the non-Topps brands. This one simply states that it is "based on a Japanese baseball card design". I have no clue what set it is based off of, but it came out looking really nice. Kei signing the card in Japanese script only helped to enhance the look of it.

This is the second card of Kei that I have posted on here. I posted the first one this past July and it may be seen here. This one, like the first one, was obtained at a Scanton/Wilkes-Barre Yankees game in 2009 while Kei was charting pitches in the stands.

I got Kei Igawa's autograph when the Yankees demoted him to Trenton to clear space for their actual prospects in Triple-A. I was impressed that he did not seem visibly bitter about how his American baseball career turned out... sure, he had his millions, but he didn't give up being a star in Japan to ride buses in Double-A.