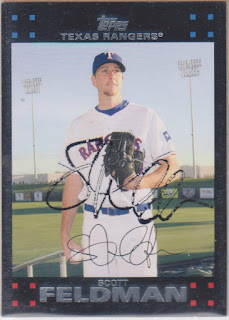 This is a card of Scott Feldman that I got signed at a Rangers game in 2008. I was on my way home from visiting my grandparents in southern Texas, and I, of course, had to make some stops on the way back to get some baseball in (not to mention a stop at Round Rock on the way there). This is the fourth card from this set that I got signed on that trip. The others were Josh Hamilton, Eulogio de la Cruz, and Ryan Rowland-Smith.

At the time, I only had two cards of Scott Feldman to get signed. Unfortunately, he only signed this one and it came out looking bad. The other card I had of him, his 2006 Fleer, would have came out looking so much better than this one since it did not have any gloss on it. Oh well, that's the life of a 'grapher.

Five years later, I got Scott to sign outside of Kauffman Stadium. He actually signed three that day, which surprised me after my initial interaction with him in 2008. One of the three cards he signed was his '06 Fleer card. I posted it last summer and it can be seen here. If he had just signed that card in 2008, I would have a better looking signature of him than this Topps card in my collection. But, that is OK as these bad looking Topps Update and Highlights cards helped me learn about prepping cards.

Scott pitched for Houston this past year and he spent a good chunk of time on the disabled list with them. He made only 18 starts and he went 5-5 with a 3.90 ERA.
at 8:48 AM

I never really cared for 2007 Topps... it always seemed to me they were a little bit more difficult to prep than other years even if you did know that you needed to do it.